Fashioning Masculinities: The Art of Menswear, at the Victoria and Albert Museum 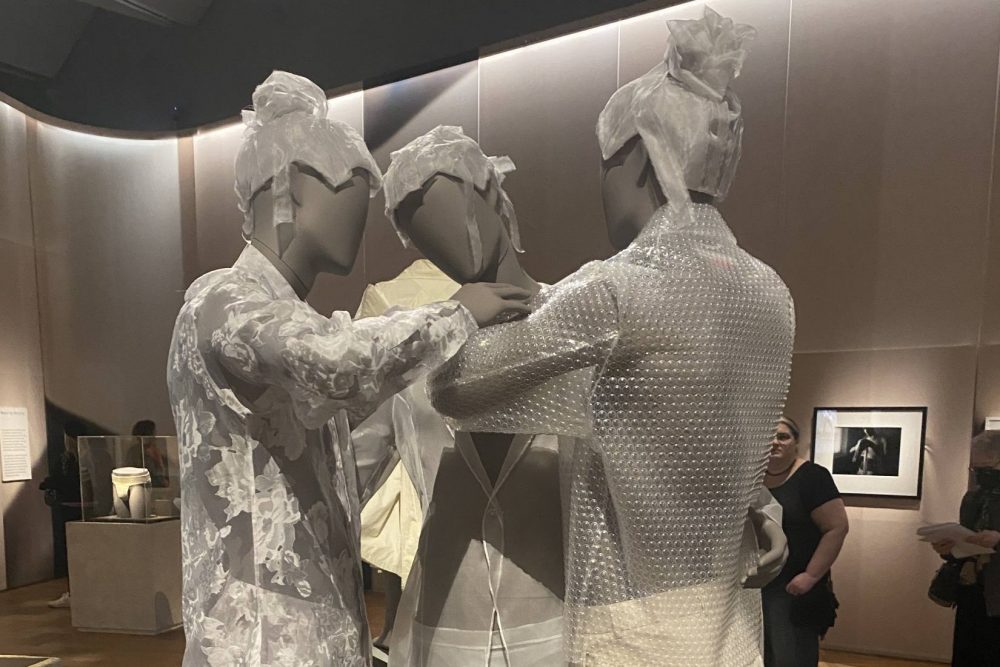 Masculine fashion, what does it look like to you? Menswear has evolved and changed over the years as society has developed along with international influence and the greater understanding of what masculinity means to us as individuals and designers. The Victoria and Albert Museum has masterfully curated this exhibition which guides you from the early European menswear, heavily influenced by the idealized chiseled Greek and roman gods, through to the French revolution and its influence on fashion, and then finally finishing in contemporary fashion and how designer’s look to challenge concepts and dissolve the boundaries of menswear.

This in depth exhibition really describes and allows you to understand the why’s and the how’s of menswear, it provides an abundance of information to really allow for you see the links between the period the clothes were worn and what the colours, styles, fabrics and connotations meant to the men as well as society. It gives you the information you thought you already knew, but allows you to see how general life influenced fashion and hopes to influence the public on how menswear is extremely characterful, and a constantly changing industry.

The first room is full of many different topics. With one side showing 18th century under garments and an impressive Armani suit, and the other side overcoming dysphoria. Giorgio Armani’s approach to menswear derived from his respect and appreciation for the male figure – he stripped out the internal structure and let the fabric drape, aiming to reduce rigidity in the look and soften menswear.

For his from his spring summer collection 1996, Jean-Paul Gaultier printed images of clothes onto garments. However, this jacket on show displayed a male torso, a trend we are beginning to see more of in fashion recently.

The exhibition also addressed ‘man scaping’ and ‘body forming’, which is the use of elasticated fabrics to change the body’s form. Spanks, a company originally founded for women’s wear hosiery expanded in 2010 into menswear and allowed for diversity on the high street.

The stereotypical ‘masculine’ body form of the greek god’s was adressed with towering sculptures of the male form on display, with reference to Hercules who is the archetype of strength and bravery. He is often depicted fighting or armed, yet the most famous portrayal of him shows him at rest, hinting at his emotions as well as showing his exaggerated physique. I find this quite interesting and telling of how the industry is growing along with the understanding and allowing of men’s emotional feelings, which is increasingly being shown in fashion.

Designers Virgil Abloh for Off-White, JW Anderson and Ludovic de Saint Sernin recreated the classical depictions of ‘The Three Graces’. For this they used sheer fabrics like organza and taffeta which are  usually associated with womenswear, encouraging gender neutrality as a reality, not a trend.

Menswear for many centuries was flamboyant, colourful and full of flounce and lace to show wealth, power and status. Those who could afford to bring dyes over from America, Asia and Africa would want to show that they could, and so would wear the bright colours these dyes created. The colour pink, with rich hue’s of magenta was a sign of money, not of gender identity which it is seen as today. Lace and ribbons were also a highly common element of a man’s look, especially in the French courts. An English gentleman John Evelyn commented ‘that one youth had as much ribbon on him as would have plundered six shops… all his body was dres’t like a may pole’ – but now when we see a man dressed in bright colours or with added detail of delicate lace around the trim, we think it is a modern twist of the original straight forward men’s wear, how wrong could we be.

The ‘classical’ monochrome sleek men’s look we think of today started in Europe after rapid change as consequence of the French revolution 1789-99. Lavish Textiles and ornamentation still featured on womenswear, while the spirit of rationality reshaped menswear into a more practical form as men started to adopt a more practical and reserved attire. The industrialisation of cities like London and Paris saw the increase of soberly and uniformly dressed men, black became the new ‘trendy’ colour.

Tailors looked to exploit this by using one colour that allowed for emphasis on sculpting the human form and adding subtle detail, creating the new modern uniform of the men’s suit which was accessible for all. This monochromatic dress suit is the epitome of masculine fashion, however contemporary designers are looking at how to combine masculine and feminine styles together, a very exciting concept!

Within this exhibition there is so much more to unwrap and discover. If you have found this blog has interested you in learning more about modern menswear as well as the history of men’s fashion, we would highly recommend you take a trip to the Victoria and Albert Museum to see it for yourself!

Thank you to the Victoria and Albert Museum for such a great exhibition. Finishing November 2022.