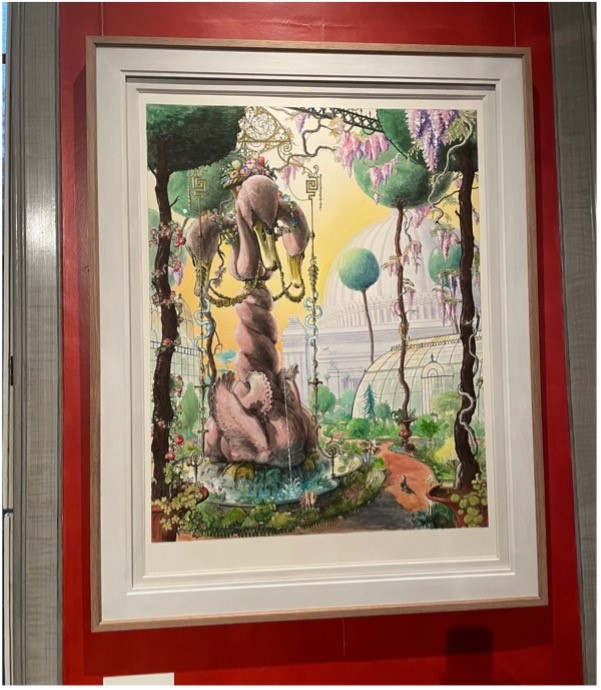 This exhibition at Sir John Soane’s Museum takes you on a journey to the weird and wonderful world of contemporary artist Pablo Bronstein’s depiction of hell. 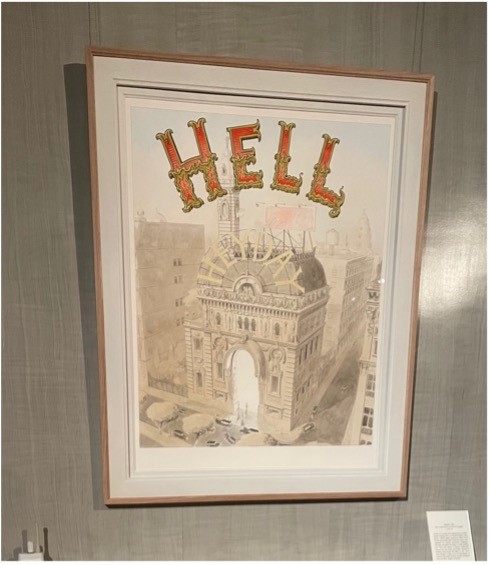 “Members club” (Gaudy mansions which used to line the avenue

have been torn down and replaced by swanky apartment buildings,

but this venerable old place is still holding out.)

This collection is a new body of work which was developed over the last year after the exhibition was delayed due to lockdown restrictions. The exhibition consists of twenty-two heavily detailed large-scale watercolour paintings created especially for the museum.

Bronstein’s vision for this collection was to turn the underworld into something glamorous and desirable. It’s not the most traditional version of hell of which most of the public would imagine, who would have thought hell would ever be described as something desirable?

This body of work presents the 19th and 20th centuries and their technological and economic advancements through a nostalgic but also deeply ironic filter. This exhibition invites the visitor to explore hell imagined as a monumental city, which they are then guided through. The city is made up of botanical gardens, oil rigs concert halls and casinos to name a few. The city portrays a vision of the underworld that lures the viewer in but is also extremely unsettling, where all your desires and pleasures can be satisfied. The artist even creates hells mines and factories as luxurious and expensive venues. 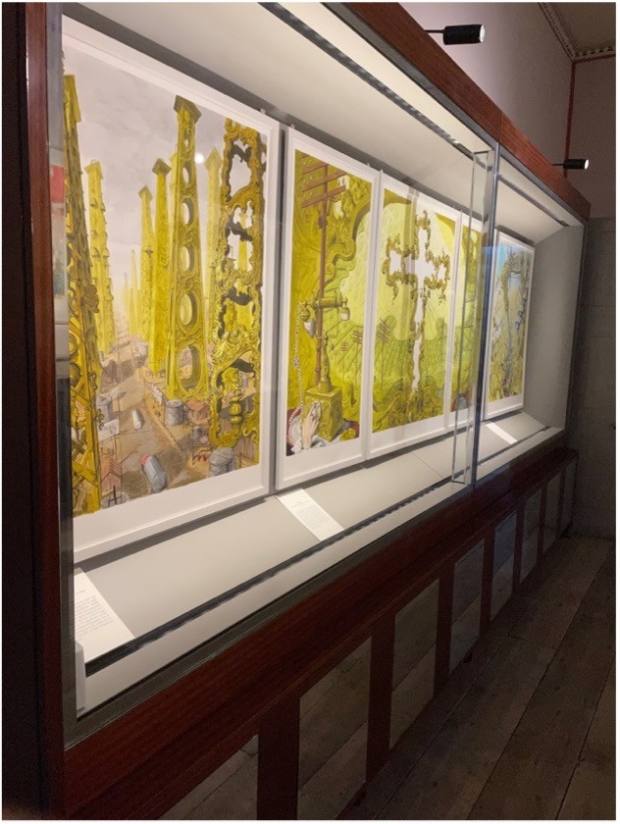 “Oil rigs” (Gleaming oil rigs rise from the dust and mud of the valley,

each vying with its neighbour for the best ornamentation).

Pablo Bronstein drew from a range of sources for his inspiration, from mannerist sculpture, commedia dell’arte, eighteenth-century interior design, the circus and early advertising posters and television. 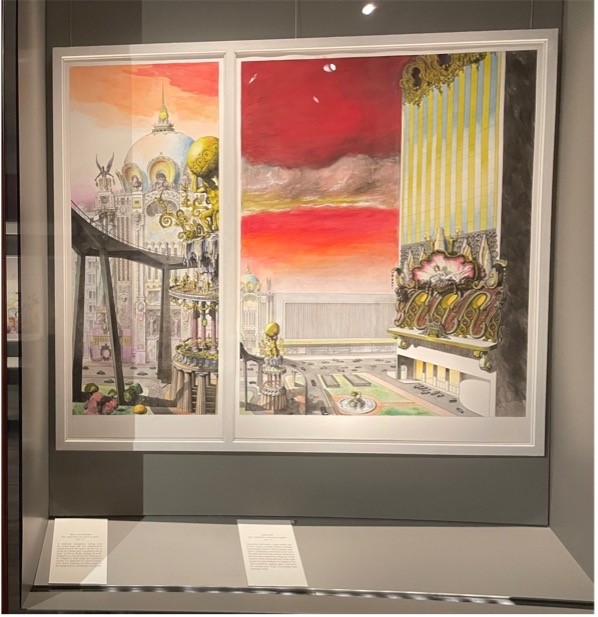 Bronstein was inspired to make this collection for many reasons, one reason being his family. Bronstein’s family are from the capital of Argentina, Buenos Aires which is referenced throughout this collection. You can see a reference to his family in the image of the three headed pink swan fountain where ribbons of the Argentine flags hang from the fountain.

giant yew trees in terracotta urns, over- grown with lilac wisteria in bloom).

What makes this exhibition, so eye catching is the amount of colour that explodes throughout the collection. The strong colours sort of happened by accident” Bronstein stated.  “Something went wrong with one of the red skies, and in trying to repair it I made it even more red. “I secretly felt quite liberated and worked back into the other drawings to make the colours stronger.” 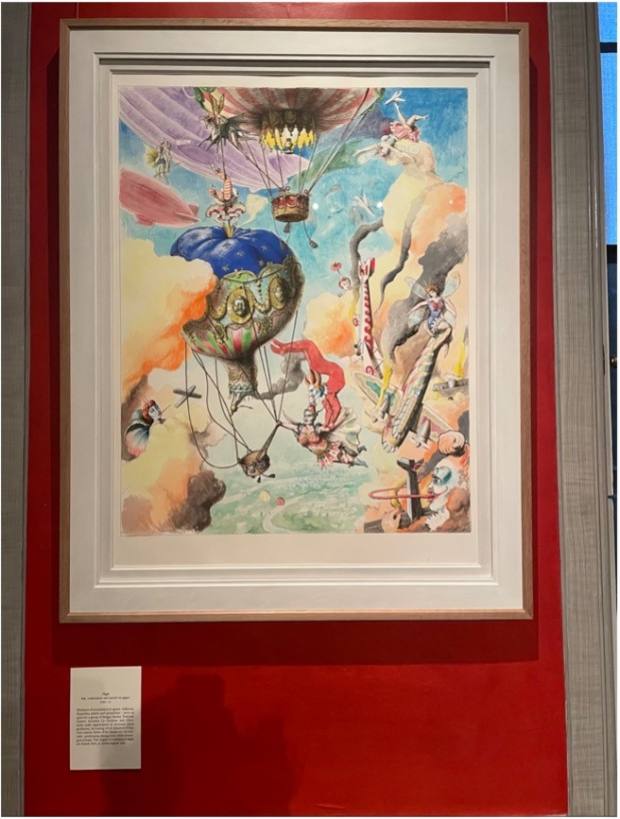 serve as sport for a group of hungry faeries)

One of our favourite pieces of Bronstein’s work is titled “Patisseries and Confections”. It consists of an array of tempting cakes which appear as skyscrapers because of the scale of the artwork. Bronstein heavily plays on scale throughout his collection which creates the unsettling feel he wants the viewers to experience. Scale is a very powerful concept and Bronstein  has created a similar effect to the famous children’s book ‘Alice in Wonderland’ where everything is much larger than it should be. This can make the viewer feel uncomfortable and disturbed. Its almost like a vision from a nightmare. 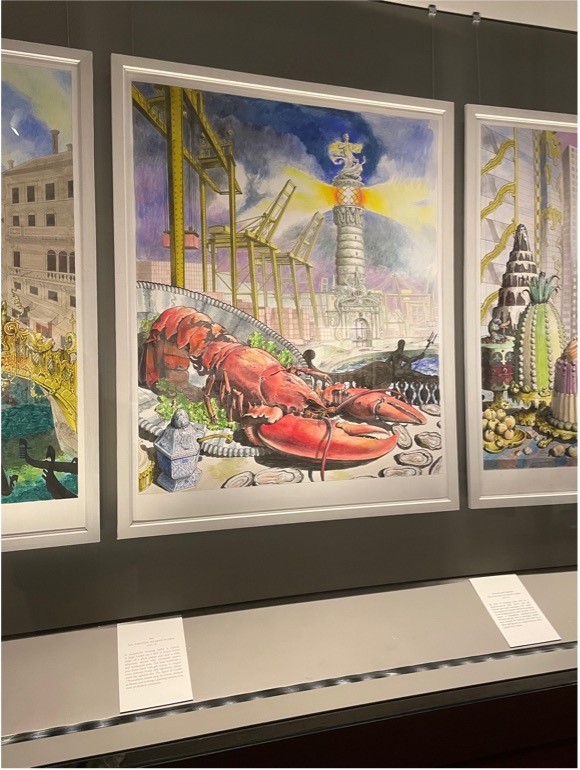 “Port” (A sumptuous evening buffet is served. A large lobster on a bed of lettuce leaves

slides off a silver platter and onto a white tablecloth).

The exhibition also consists of a new film which features a group of antique dealers performing a masked ballet while trying to sell antiques to a dead man. The proprietor, played by Rosalie Wahlfird and her two assistants Iris Chan and Irene Cena, portray that in hell shopping is the ultimate cultural experience. Bronstein has previously drawn from 17th century ballet to develop performances at the Tate. The short film was shot mostly at his home during lockdown which creates a big comedic aspect however also has a quite disturbing feel with its dramatic music and hyperbolic language.

This exhibition was really interesting to visit, as well as the art work the short movie was a great extra to the exhibition and helped the visitor get inside Pablo Bronstein’s head. John Soane created the museum to educate and inspire he visitors and this exhibition lets the viewer drift off into a different world and loose themselves in a new vision of the underworld.

Make sure you go and visit Sir John Soanes Museum to have a look round.