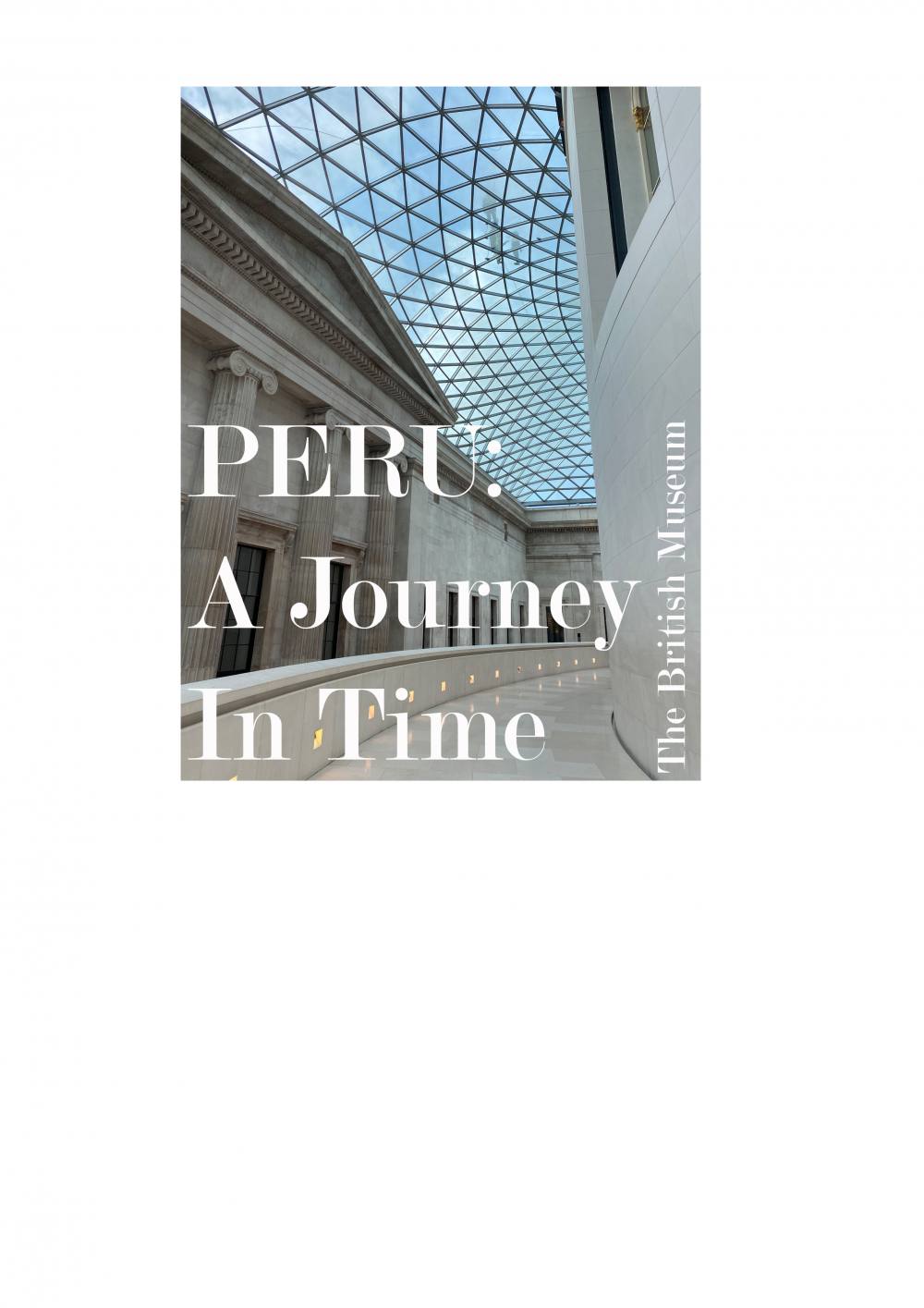 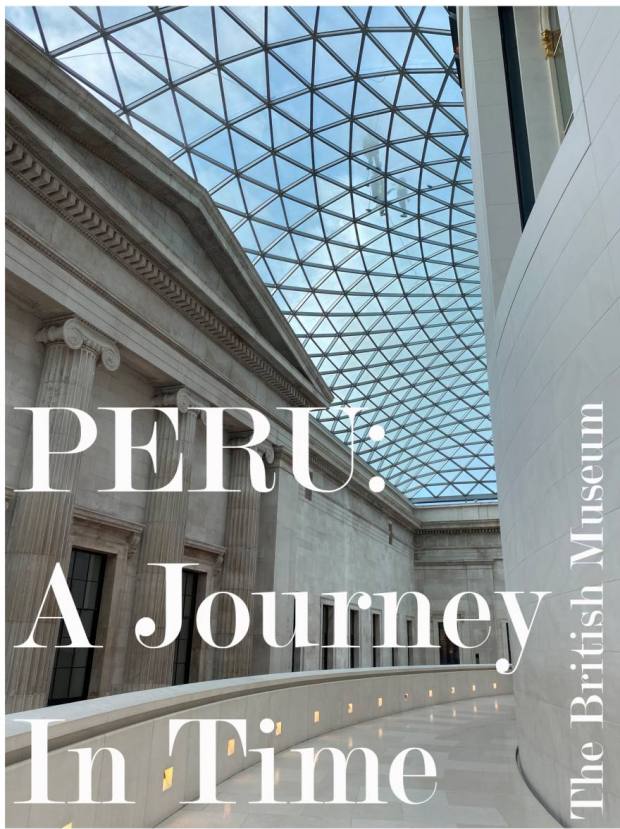 Independent, isolated yet highly developed. The Andean people challenge contemporary ideas of what makes a successful society, yet their civilisation began 3,500years ago (900 to 200 BC). The British Museum’s exhibition ‘Peru: a journey in time’ intrinsically integrates the different Andean communities in chronological order yet still allowing for an organic integration of life, death and rebirth which is poignant to the lives of the indigenous communities.

We must understand the connection the Andean people had with the land, which was shown predominately with symbols in their artwork, for example this cloth showing the three diverse landscapes the communities lived from, the rainforest, the mountains, and the ocean.

They were incredibly resourceful from the sea and cultivated the land for crops, showing great technological innovation and communities that were rich in knowledge. However, unlike modern day cultivation they do not just take the resources, what is so beautiful about the Andean culture is that they believe that nature is a living being. ‘Sustaining all life, woven into the shared belief system of which the natural and supernatural worlds are intimately connected’. Many objects in the exhibition show this intimate connection through the divine beings embodying the power of plants and animals, reflecting how nature supplied for the needs of society. 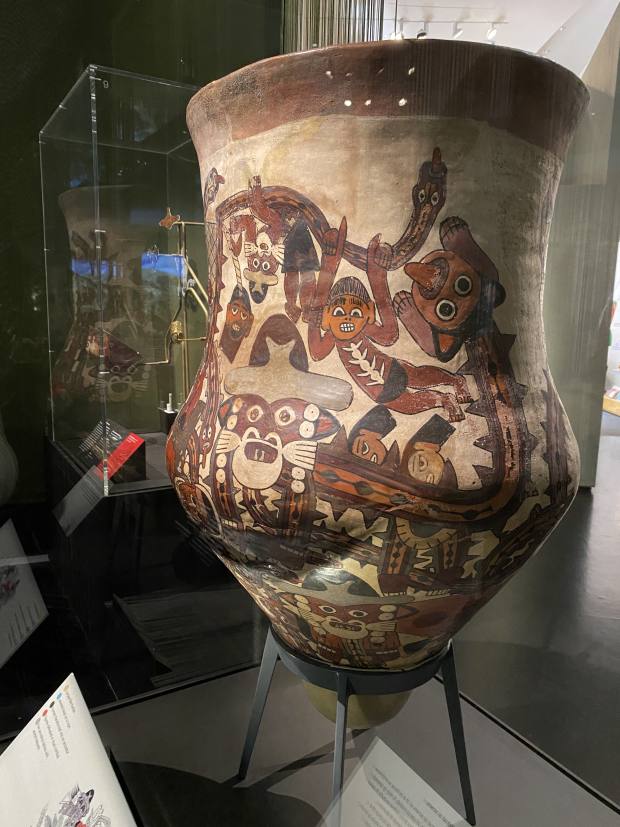 An Andean understanding of time is contradicting to that of a western perception. The belief that past, present and future are directly interconnected and happening at the same moment is for us almost incomprehensible and disrupts almost everything we base our cultural beliefs on! The Andean people take the living past into the present which influences the future. The importance of respecting ancestors and ensuring a safe passage into the afterlife is integral to the communities.

Just dissecting this remarkable piece of textiles, we can take so much information about the funerary rituals. Firstly, the severed heads which represent the importance to the afterlife, it is suggested that the heads were taken from the sacrificial rituals which then developed into the life-giving ceremonies. The life-giving ceremonies were when the life force of individuals were symbolically extracted to maintain balance in the neutral cycle of life, enforcing this further the heads are sometimes depicted with plants sprouting from the skulls to show the interdependence of life and death.

Deities, were how the ancestors and mythical beings were depicted with head dresses on, nose pieces and accessories which gave them animal type features showing the strong link with nature. This style of dressing was not just depicted in the artwork to honour the ancestor, but also worn by the living bringing the deities to life.

Textiles also played a large role in respecting the dead and the ancestors. Skilled and trained weavers were sourced to create the most beautiful, patterned textiles to wrap the dead body, usually being much more complex weaving methods and finer fabrics used for the dead rather than the living who wore practical everyday cloth. The Textile industry was proof of technological innovation in society, being a collaborative activity, the trade was passed down to workers who would train for years to perfect their skill and improve their knowledge.

Sacrifice and Ritual were dominant methods of respecting the ancestors, pleasing the gods and ‘maintaining a balance between the natural and supernatural worlds’. Ritual battles provided this, the indigenous communities didn’t fight to expand territory but used soldiers in a Moche ceremony of ritual battle. In which pairs of finely dressed warriors engaged in hand two hand combat, the losing warrior was stripped and taken to the mountains to be sacrificed.

Hallucinogenic plants were used extensively and were an important part of Nasca ritual, it allowed individuals to transform into different states of being and transcend time. This was visible in the artworks and ceramics of the communities giving the individuals the ability to really aline with their belief of life, death and rebirth being connected so deeply. 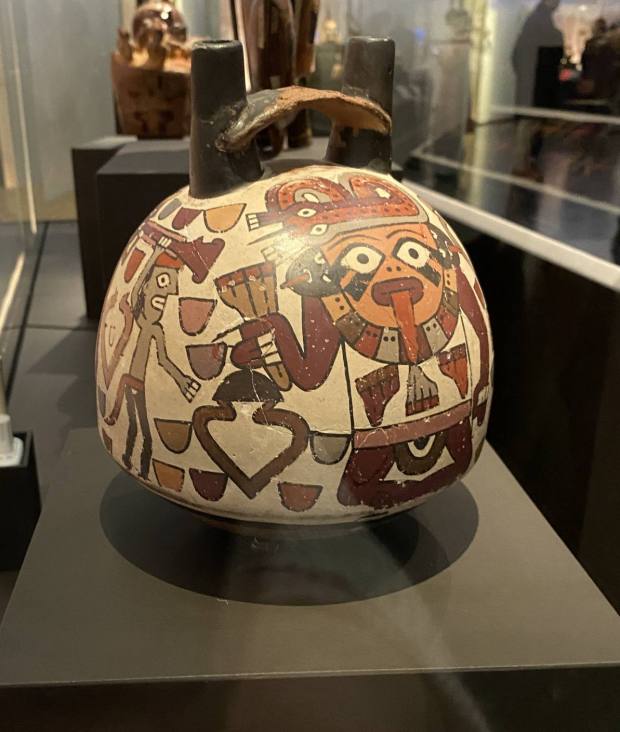 The exhibition expresses all these elements of Andean life and culture in such a respectful and informative way I felt myself gliding round the room mesmerised by each fact and admiring such an enduring culture and community who lived through colonisation from the west. It truly is remarkable and really telling of how deep rooted and powerful their traditions were to survive western repression and rule and still be seen to be practised today, 200 years after gaining independence again from Spain.

‘In many ways, past traditions inform present practise, and the enduring belief that humans are a part of the living landscape helps to shape our shared future. The objects in the exhibition connect this narrative and provide a brief glimpse of these remarkable societies from whom there is so much to learn’. The last message from the Exhibition curators as you leave the exhibition, which I felt summed the whole display up wonderfully.

Thank you to the British Museum for this remarkable exhibition, if you found this interesting then I strongly suggest you visit the exhibition and see the artifacts for yourself! Closing 20th February 2022.

Photos and Words by Amelia Vance