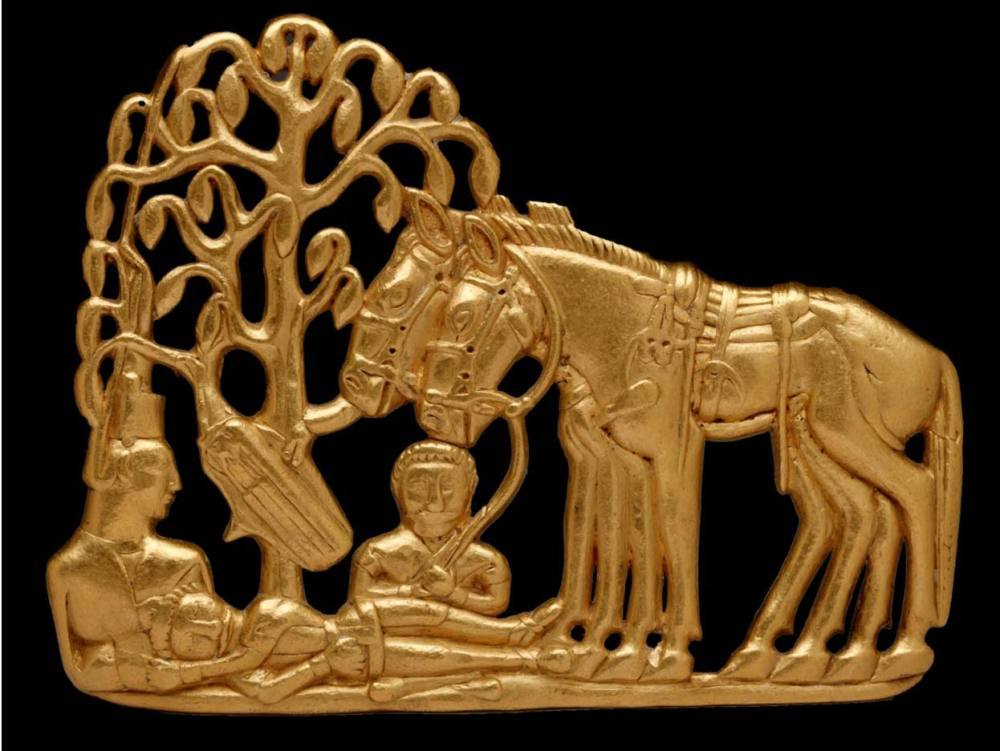 We like to keep our interests broad here at Hawthorne & Heaney so The British Museum’s current exhibition, Scythians: Warriors of ancient Siberia, looked appealing to us. On from the 14th September 2017 to the 14th January 2018 it looks at the nomadic tribes who flourished between 800 and 200 BC, displaying various examples of their gold jewellery, clothing, weapons and living equipment.

The exhibition is spread across 4 large rooms, with carefully illustrated videos and child friendly sections of signage. Whilst walking round there is a subtle soundtrack of wind blowing playing in all the room to really add effect the the visuals you see.

It starts off with a little introduction about the Scythians, which was a collective name for different tribes that spoke Iranian, and shared a similar lifestyle and dress. Little has been previously known about these people who controlled a vast region of northern China all the way to the Black sea, as they had no written language, but since burial sites have been found and the permafrost preserved most objects scientist and historians have started to piece together a look into their life.

They were sophisticated crafts people and fearsome warriors who lived in tents and herded sheep, tradition was a focal point around whatever they did, as they used to bury the dead with all they needed for the afterlife. They had a strong bond with their own horses and often they were buried along with the owners as they believed the bond carried through to the afterlife.

The jewellry on display was stunning gold that was usually either hammered and polished by hand or cast using a technique using cloth and clay. Gold was associated with the sun and power and most of the scenes buckles and decorative horse saddles depicted were scenes of mythical animals killing ordinary animals, this was believed to symbolise concern over preservation of world order. The items are remarkably well preserved and some still contain their original turquoise or blue glass inlays.

Opposite these there is a bit of information about Tsar Peter the first, who sent exhibitions to southern Siberia and found the burial sites. After this he ordered anything gold found around there was to be sent to him,where he documented and recorded and stored all the items. Some of the watercolours used to document the items are also on display.

What I found most interesting was the clothing and textiles that were displayed. One of the burial sites that was found contained what they believed to be a Chief and his wife. The clothing was elaborately decorated with punched, gold crouching panther pieces and a lot of the fur that they wore, a variety of squirrel, leopard, and other animals, was dyed using traditional natural dyes such as indigo and cochineal. Other items of particular interest were the highly decorated shoes, head gear and the fake beards the men were buried with.

The beards were of particular speculation because scans and the preservation of the mummified bodies showed that they were often clean shaven and both men and women were heavily tattooed. Applique onto woolen items were heavily featured as well although these didn’t survived as well as others.

What tribes they couldn’t make and produce themselves they traded and stole from other tribes. The most highly prized item was Chinese patterned silk, some of these fragments have survived. The exhibition also touches on the weapons and armour that was used, the bond with their horses and the influences from other cultures such as the Greeks, and Persians. Eventually they were superseded by other nationalities and tribes as new traditions got introduced the old ones vanished and formed what we know as the mongol tribes and others.

Over all the exhibition is really informative and covers a wide variety of interests and is running till the 14th January 2018 at The British Museum.

All photos are from The British Museum Blog.