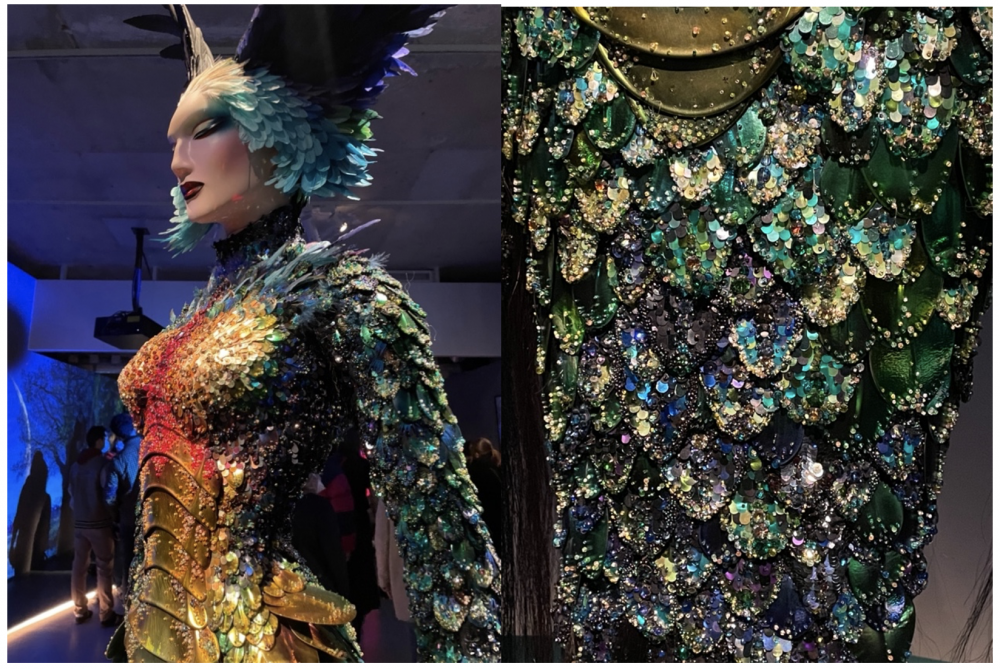 This exhibition ‘Thierry Mugler : Couturissime’ is on at the Musée des arts Decoratifs, Paris.  A wonderful exhibition to go and see should you be in Paris.

The exhibition focuses around the work and life of Thierry Mugler (1948-2022).  Known for his avant-garde techniques and use of interesting materials like faux fur, vinyl, latex, glass, PVC and chrome.  His ‘fantasy-tinged architectural style and bold silhouettes have made their mark on the history of fashion’. 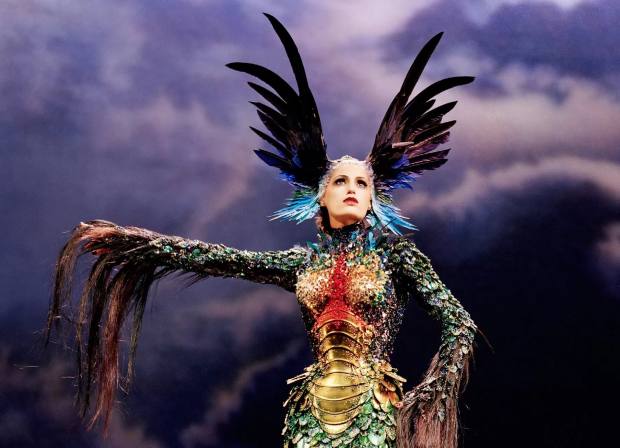 The exhibition showcased over 140 pieces, almost all of which had never been seen outside his ‘industrial couture’ atelier. Also shown are videos, photos, music videos, accessories, stage costumes and sketches. 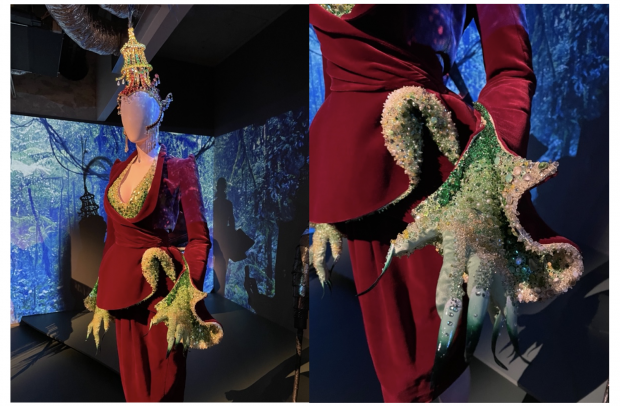 In 1997-98 two collections debuted by Mugler, Les Insects and La Chimère. These turned heads due to their fantastical and mythical depictions.  Taking inspiration from Insects, reptiles, birds and butterflies. Les Atlantes, took inspiration from the sea, in all its mythical depths. 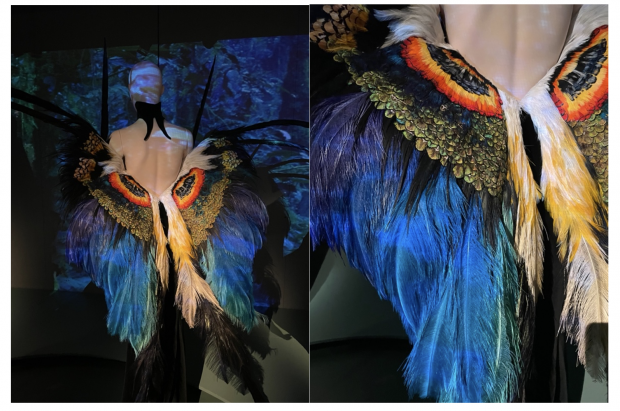 Mugler was an innovator, and determined to use synthetic materials in his work opposed to real skins or fur.  He created his own versions, the most famous of which are his embossed leather jumpsuits, pieced together to resemble crocodile skins.

Another example of this is the stunning plumage on his butterfly dress.  A long velvet sheath with flared train adorned with peacock feathers. 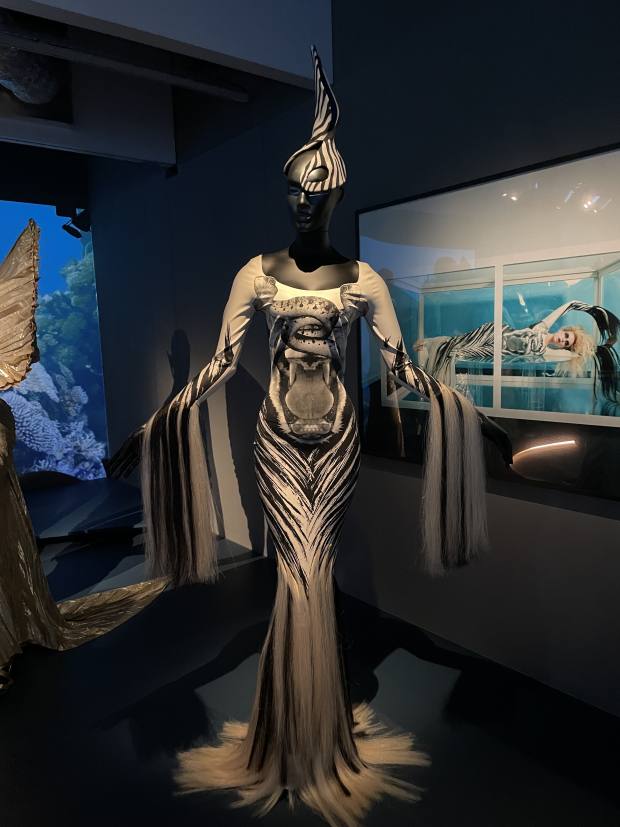 Mugler embodied a key moment in French fashion history, when the ‘Jeunes Créatuers’ put Paris back in fashion competition with the rest of the world.

One of the most breath-taking and interesting pieces was his famous La Chimère gown.  This piece was designed in collaboration with the famous corset designer ‘Mr Pearl and the artist ‘Jean-Jaques Urcun.  It is said to be one of the most expensive couture creations in history. 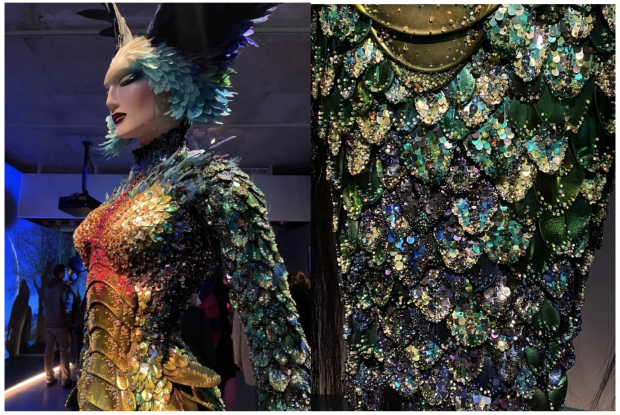 A long sheath dress, and fitted corset, adorned in ‘scales’ embellished with feathers, horsehair and crystals. It was one of the pieces in this exhibition that took your breath away, whether it be by the dazzling crystals and embellishment or the ‘scaled’ effect. 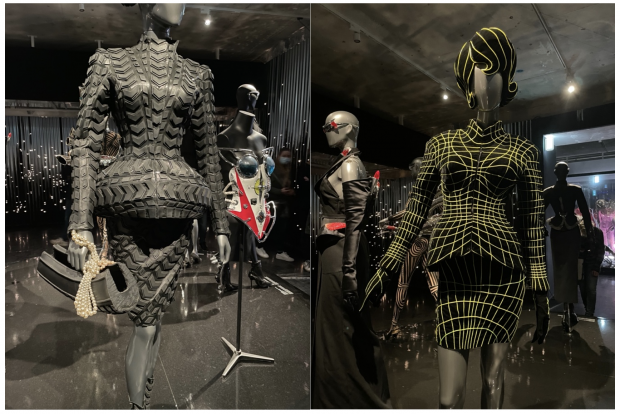 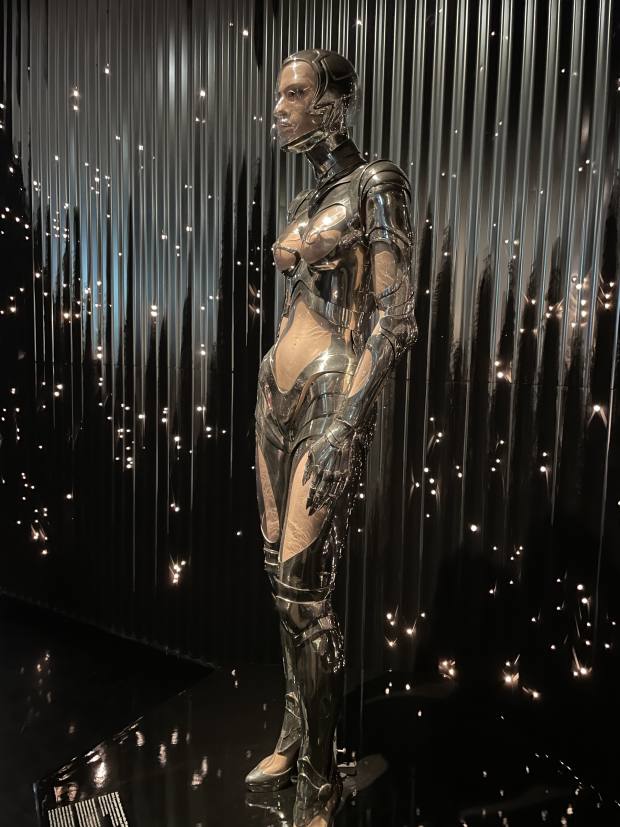 Maschinenmensch from the 20th Anniversary collection 1995-6

One of Mugler’s all-time masterpieces was the ‘Maschinenmensch’ which was presented in 1995 at the 20th anniversary show. It plays homage to the character of ‘Futura’ from the dystopian novel Metropolis.  The outfit took 6 months to make, and is reminiscent of a crabs shell in its construction.  The body armours plastic internal framework enables the wearer to move.

From experiences when he was young, Mugler often looked to the sky and his favourite star, shining bluer than the others.  He took to thinking of this star as his guiding angel, following him though life.

This later formed part of the inspiration for his perfume line, which he wanted to smell ‘so delectable you want to eat it’ 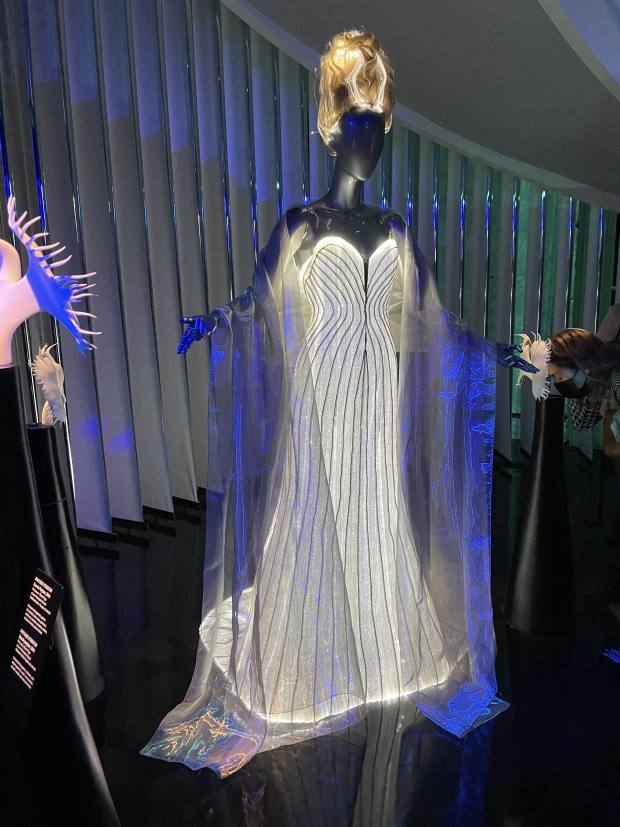 A Luminous dress from the Les Médases Collection 1999-2000

Fascinated by breath-taking architecture and the immensity of natural settings, Mugler went on to photograph his own muses and create his own campaign visuals.  He took to extreme locations, inspired by their sheer beauty and power. Photographing muses such as Jerry Hall in locations like an iceberg in Greenland, the dunes of the Sahara or atop the eagles of the Chrysler building. 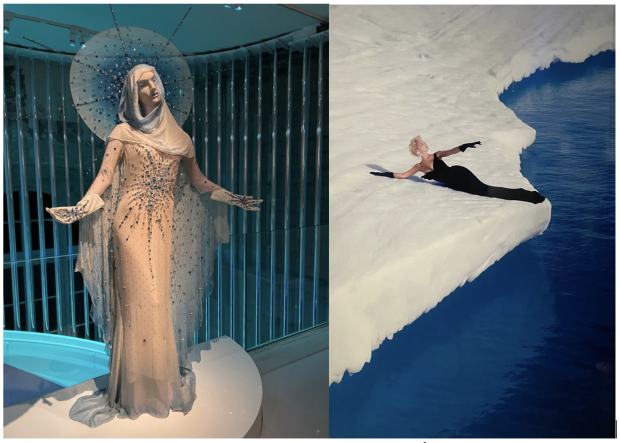 A silk chiffon cape gown adorned with crystals from the 10th Anniversary Collection, 1984-5 and an image from the iceberg photoshoot

Mugler considered costume essential in the construction and enhancement of an individual’s life, staging it to make it more beautiful and fun. 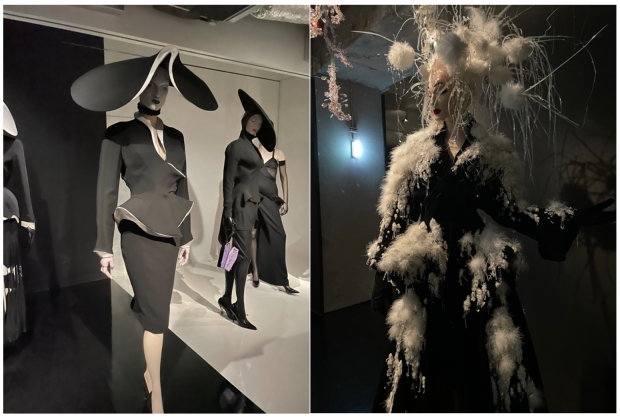 Garments from the 20th anniversary collection. With a fitted velvet coat with snow look crystals and feather embellishments

Mugler adopted materials like latex and vinyl, often used in the underground scene and turned them into elegant classics in his collections.  The Mugler Look made history. 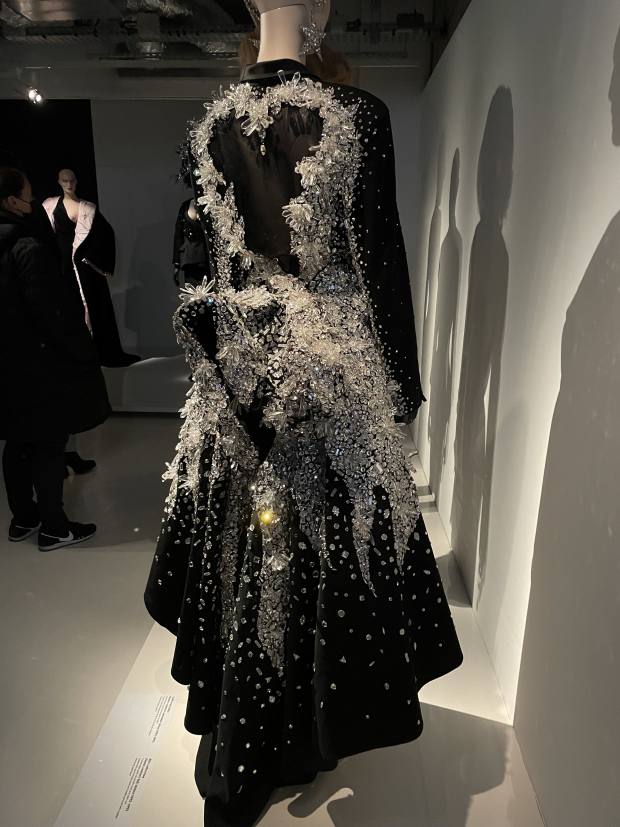 In 1992 George Michae released the music video for his hit song ‘Too Funky’ music video.  During this time, George Michael had fallen out with his record company and  boycotted appearing in his own videos to spite them.  For ‘Too Funky’ he chose to use footage of a Mugler show, couture outfits and the models. 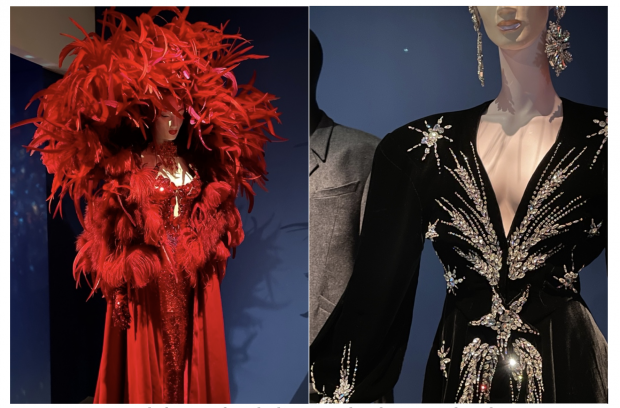 Details from outfits which appeared in the Too Funky video 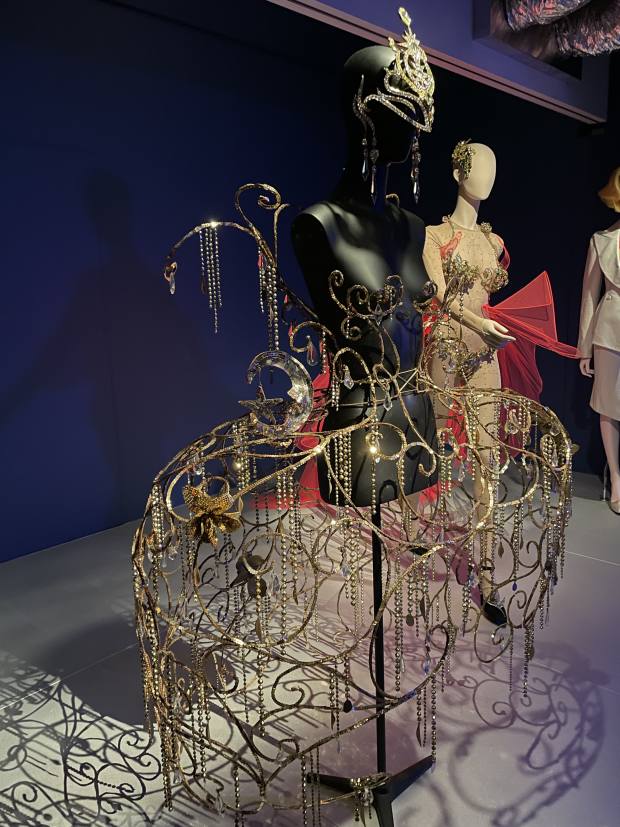 This exhibition truly made us fall in love with design and embroidery all over again, with the dazzling sequins and elegant forms of the designs.

Thank you to Museé des Arts Decoratifs for this beautiful exhibition.

Words and Images by Rosie Watkins