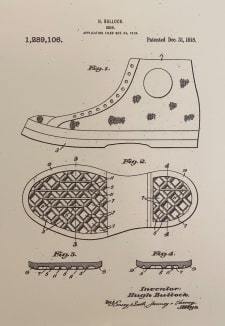 This exhibition showcased how the sneakers you choose can relate to a particular sport, music genre or subculture. Fast paced production leads to us and the brands themselves dismissing the history of where it all started. The motivation for the exhibition was the innovative attitude and products within the sneaker industry being developed today.

Stock X funded the Sneaker Unboxed exhibition, the brand is a live marketplace for people selling their sneakers online, along with other designer products. The data that they have collected throughout their five year history, has allowed us to see patterns and behaviours of consumers within the sneaker industry. 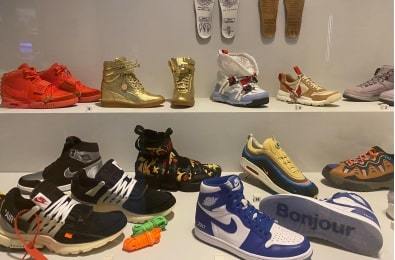 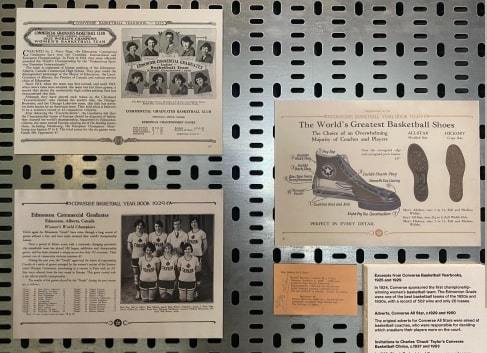 Where it all began, Converse All Star sneakers being the oldest shoes at the exhibition, taking us back to 1920. Charles ‘Chuck’ Taylor brought out his first pair in 1917, marketed towards basketball coaches to influence their players. Converse All Stars were the Olympic shoe for 30 years, due to their effective sponge rubber insoles and moulded outer sole, which benefited athletes as the signature diamond tread avoided them slipping on smooth wooden floors. The Converse All Stars were extremely popular until the late 60’s, and then the sneaker industry began to grow. 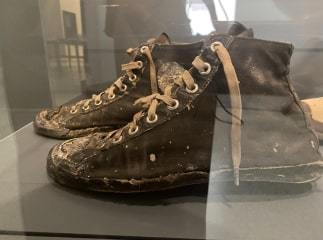 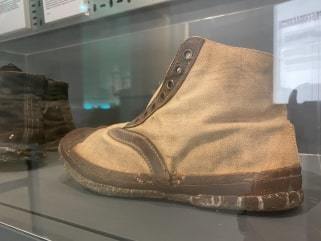 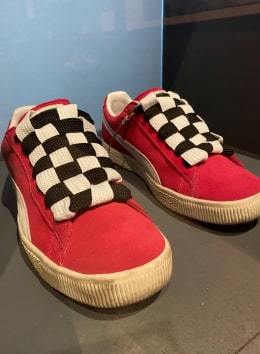 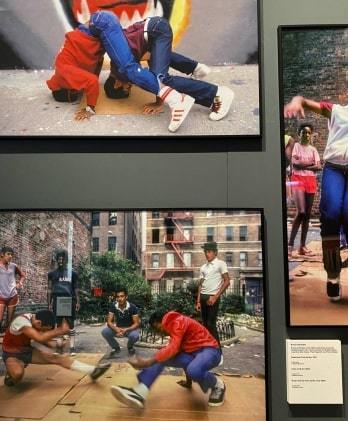 Customising sneakers was something that was at the forefront of the exhibition. As the 1970’s began young people from diverse inner-city neighbourhoods started to wear sport sneakers as a fashion statement. However brands were unaware of this, therefore still promoting them as sports shoes. Brands saw the new craze and marketed their sneakers to younger people, towards the 90’s started collaborations with fashion brands.

Within the 1970’s, people were having economical issues, yet they still wanted ‘fresh creps’. Therefore they would buy the well promoted sports sneaker, and interchange accessories, such as different width or coloured laces. To match outfits or just to make a statement. People were thriving off the compliment they were getting about their sneakers. 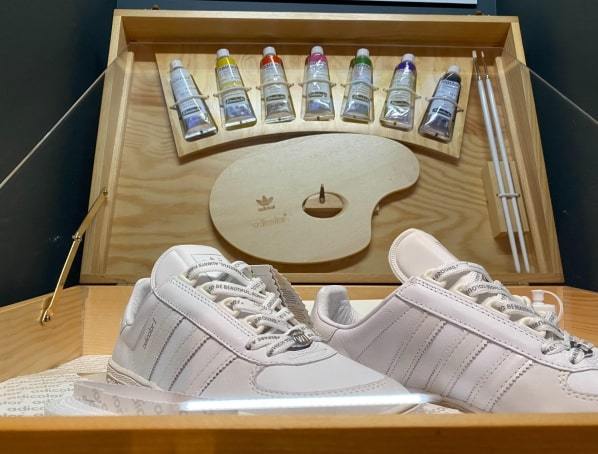 Adicolour kits were available to buy in 1983, which were a set of coloured marker pens. Later in 2005, the kits were reissued with oil paints. 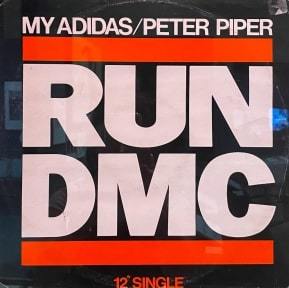 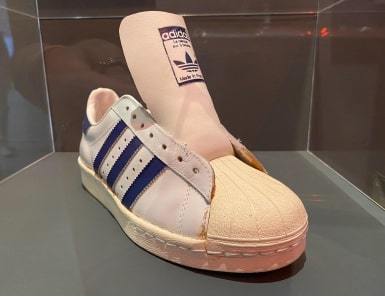 Another sneaker trend began in the 1980’s revolving around Adidas, Run-DMC were a big hip-hop group and they were the first non-sport stars to promote a sports brand. The iconic unlaced Adidas Superstars with the tongue pushed out took New York by storm. Originating from one of the band members being jailed, as the typical prison procedure his laces were removed from his shoes, however when being released he did not replenish the laces and the trend grew from there. Increasing Adidas’ sales, as they had plummeted in the 1970’s.

It was interesting to see which trainers fitted with each subculture and the journey they had taken. 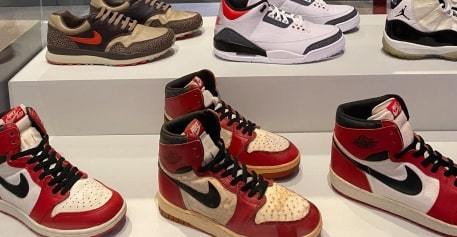 In 1984 Jordan’s were established, a collaboration with Micheal Jordan and Nike. Nike created the shoe particularly for Micheal Jordan, this was the first collaboration of a brand and a singular sports individual, resulting in success and thirty five sneaker models being released to date. 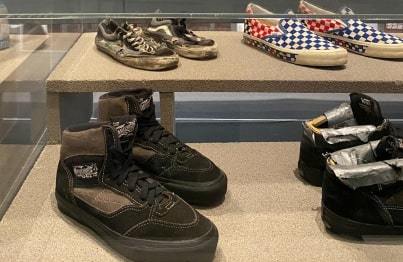 Skateboarders did not really have much choice for shoes, therefore wore basketball shoes to support their ankles while skating. There was suddenly a change in the sneaker market as Van’s rebranded themselves with their famous logo today ‘Off The Wall’, in 1976, they took off in the skating subculture, for their sturdy structure and style. Nike Air Jordans were created as a result of Van’s success, and were very popular within the skateboarding culture. 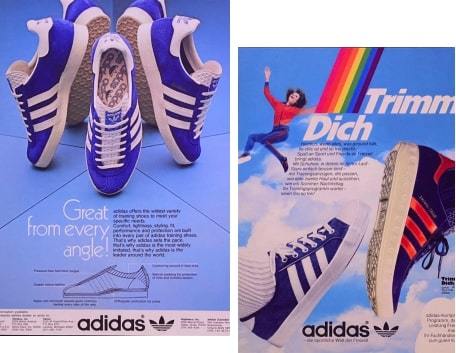 Casual wearing of sneakers was adopted by football fans in the late 1970’s in Liverpool and Manchester, the subculture the ‘Casuals’ showed their rivalry by their sneaker, your choice showed which football team you supported. 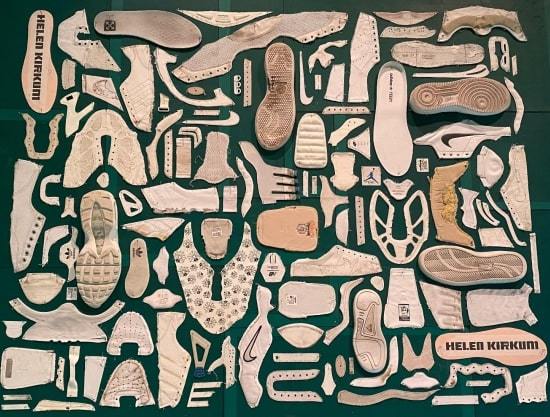 At the beginning of the exhibition it explained that sneakers are constructed by different sections of the sneaker being created in different factories world wide, and then being shipped to one place to be constructed. Therefore adding to the industry’s carbon footprint. As the exhibition unfolded it showed new sustainable methods of making shoes that brands are now considering as well as producing for the market. 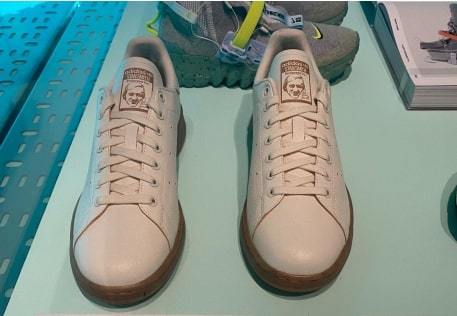 There were some great examples of how the sneaker industry is developing, for example Adidas have made their classic Stan Smith’s out of Mylo mushroom leather, looking and feeling like animal leather however totally harmless on the environment. 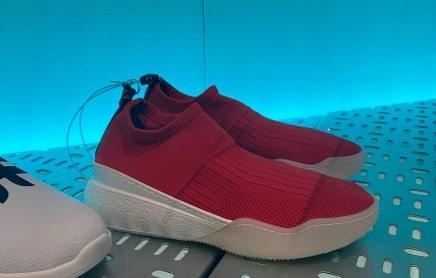 There was also Stella McCartney Loop Sneakers produced in 2018, which was a new concept of how sneakers are attached together. Instead of using toxic glue, adding to our carbon footprint, McCartney uses interlocking clips and stitch techniques instead. Another issue within sustainability was that each part of the shoe takes different times to degrade. With this shoe the parts can be removed from each other easily, therefore making it easier to recycle or be reused.

To conclude the exhibition was an interesting journey, it was a great way to see how shoes have evolved over the years and how they are going to keep adapting in the future when adapting with a sustainable attitude.

The Sneakers Unboxed Exhibition is on at the Design Museum: Now until the 24th October 2021, tickets are £14.00, some concessions available- see the website for full details and booking.