The Louise Bourgeois: The woven child was certainly an exhibition that made you stop and really consider the thought process of each piece, what emotion and psychological motive she was trying to portray to the viewer. With her use of materials ranging from steel to bone to gold and lingerie, each surface represents a memory and emotion from her life.

The last two decades of her practice became more and more oriented around fabrics and the amenable characteristics of them, the ability to cut, tear, rip and then sewing them back together which Bourgeois used in a strong metaphorical style. Enhanced by the tactile sense of the pieces which evoked vulnerability and intimacy which Bourgeois furthered by using her own personal garments and bed linens in her work. She stated they were her ‘second skin’, they had been present at the monumental events in her life and were now a representation of that memory.

As you enter the exhibition the first installation you are drawn to is ‘Cloth and Bone’, a steel pole has cattle bones attached to the end of rods which hang the artist’s undergarments, all saved from her childhood or of her mothers. Louise Bourgeois believed that the clothes she kept were just as important as the pages of her diary, which I can’t agree with more! Hunting through your wardrobe and finding certain items that suddenly spark a happy memory is just magical. Or more fitting with this exhibition, one that has that sentimental purpose to you, that words in a diary just couldn’t capture.

Louise Bourgeois explores the meaning of mending and how this is shown through her use of fabric. The sculptures are formed from several distressed or ripped pieces of cloth which are then sewed back together, in a manner where the seams are still raw and visible. A metaphorical stance of human emotional repair which is not always perfect and when we are ‘mended’ we will look different than before how people carry their scars and allow this to be normal and ok, with the finished product becoming a work of art.

Her connection with fabrics is relevant to her mother who was a tapestry restorer, the late exploration from Bourgeois into fabrics suggests that in her later years of her life she wanted to revisit back to her youth and her family seeking familiarity with fabrics.

This series of textiles was based on the character Eugenie Grandet who was oppressed by her father, Bourgeois felt similar with her own father and wanted revenge against him. The artwork was made onto handkerchiefs and tea towels collaged using old embellishments from her hats and dresses, with most frames showing a clock to suggest the passing of time.

My favorite series in the whole exhibition were the stuffed heads, each made with a textiles exterior and molded to express a human portrait. The aim of these portraits was not to create a likeness to any person but to show a psychological state and emotion, with some of the works having two faces on one head to express the contradicting and complex feelings shown by humans. Each head is made from a different process ranging from cloth to tapestry and needlepoint. 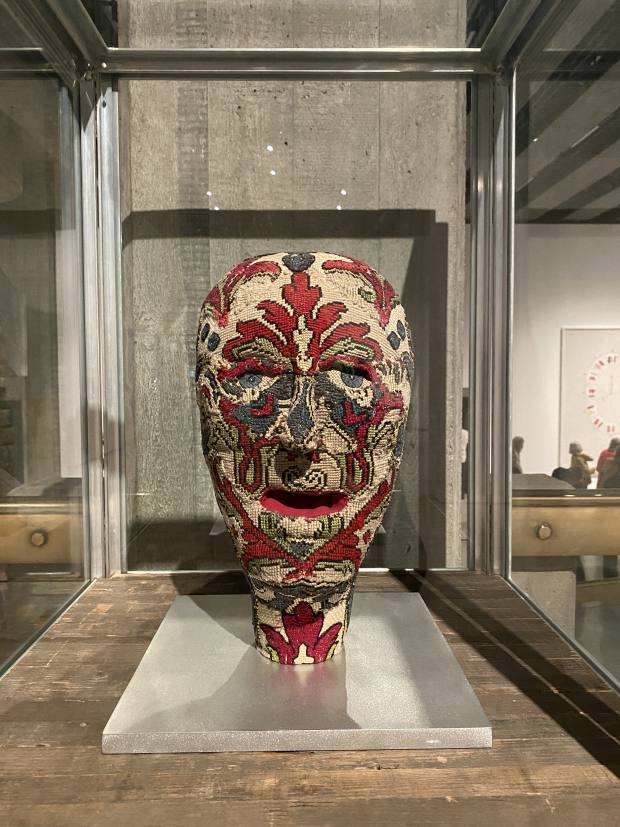 This collection of work was created by Bourgeois when she was trying to understand her youngest son and his withdrawal. The sculptures represent his birth and early life with the figures being distorted and further animated by the concave mirror behind the scenes which added the metaphorical message of a distorted memory. Louise Bourgeois in her own words,

‘There’s is a child who simply refused to be born, his birth was quite late. Was there something that he perceived that prevented him from wanting to leave the womb and go out into the world? How much of who he will be, his feelings and actions, will be pre-determined by this refusal to appear? How will this child face the future? Will he be shy, reduced to silence, awkward or even hostile?

This creation was probably one of the most striking in there, a life size shaped human hangs from a single point attached to the ceiling, made entirely from black cloth and only the bottom half is recognisable as human limbs with the top consisting of a spiral. The twisted nature of the piece evokes nausea, dizziness and disorientation; it shows the physical manifestation of psychological states such as fear, anxiety and alienation. Bourgeois interest in the spiral shape stems from her fear of losing control, with the winding of the spiral being a tightening action and retreating into a point of disappearance. Then with the opposite movement of twisting outwards is a representation of giving up control and allowing positive energy.

If you don’t like creepy crawlies then look away now! The Spider however for Bourgeois was a symbol of a ‘mender’ as if you break its web it will just rebuild it. This creature sits above the cage with its legs wrapped around it in a protective manner, Bourgeois personal belongings sit within the metal cage again, another nod to the sitting time. However the large scale of the spider has hints of a predator and if you digest the facts of spiders they have cannibal characteristics which again show’s a more complex side to the artist and her feelings towards motherhood and her sexuality.

This glass box contains hanging conjoined heads each with two faces, the black fabric resembling depression, mourning and melancholia. The mirrors in each bottom corner of the box show the scrutiny the faces face, along with the idea of fragmentation and unease.

Near the end of the exhibition the sculptures begin to become more abstract still with gestures towards the human figure but very faint. One installation that really caught my eye was a collection of vertically stacked shapes. All were made from clothing or bed linen, terry cloth, tapestry and upholstery and unlike her other work had a sense of regularity. Louise Bourgeois felt the predictability of formal repetition and the rules given to geometry allowed for her life to have some order, she felt the set rules were the exact opposite to the emotional world she inhabited.

‘Soft fabrics show a sense of vulnerability and intimacy, while also remaining flexible, adaptable and resilient’, This statement from the Hayward Gallery I felt really concluded the exhibition and the change of materials presented by Louise Bourgeois which perfectly mirrored her emotional state.

Thank you to the Hayward Gallery for such a wonderful exhibition, if this was an interesting read I would highly recommend you visit yourself.

All pictures from Amelia Vance (Hawthorne and Heaney Intern)